How to Avoid getting ‘Scope-Creeped’ as a Project Manager

Let’s address the biggest elephant in any project manager’s room. Yes, you probably have your mind running in the same direction as mine: Scope-Creep.

As a project manager, you probably worry about Scope-Creep and its derailing effect on your project. Have a look here on what Scope-creep sounds like.

Can we just add a new feature really quick before we go-live?!!! 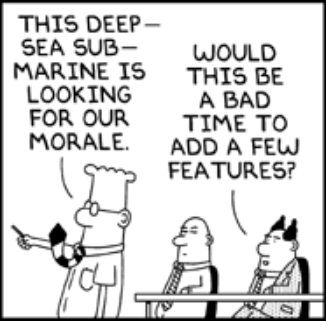 We are already building so much; another new thing won’t hurt much!!

Oh! Being the star developer on the project can definitely add this extra feature too!!

In overview, it might sound like going the extra mile while delivering a project, but in reality, it’s like a shark who sneaks up on you and before you realize it, it’s already too late.

Scope-Creep occurs when a project progresses and the project’s requirements and deliverables increase in an uncontrolled manner. Sometimes, happens several times during a project, poorly affecting the project’s schedule, budget, costs, and resources.

Let’s talk through a few simple tips to avoid getting scope-creeped:

Additionally, it is only fair to add that for all the harm scope-creep does, there can be an upside. For example, going past the work scope you can gain more grateful customers which in turn can increase revenues. But it’s important to gauge the limits of scope-creep. Happy PMing!!