Exploring the Difference Between Aura Component and Lightning Web Components

Salesforce has been on a fantastic journey with the use of Lightning components. Years ago, Salesforce developers used a unique HTML tag-based, mark-up language, known as VisualForce and used Apex as the controller for logic. 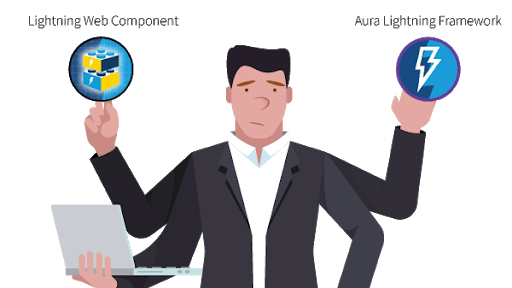 Fast-forward 5 years from the time of Aura; the web stack has seen an unprecedented level of innovation and standardization that transformed from a rudimentary page-rendering platform to a web development platform.

Web technology is being changed every day, seeing an unprecedented change in JavaScript Frameworks, redefined way of creation of a web page, and more. Lightning Component also has to become Lightning web components to accommodate the newest technologies in Salesforce development.

A Quick Recap of Web Components

First, let us review what web components are. Web Components consist of four separate technologies that are used together:

What is a Lightning Aura Component?

Salesforce Lightning Component is a user interface (UI) based framework for developing single-page mobile/desktop/web-based applications. Using the Lightning Component along with these tools, you can customize and deploy new apps in mobile devices easily and effortlessly.

Aura components are reusable units of the app. It represents a small section of the UI of reusable apps. Aura Component Framework contains several pre-built components. We can consider this an example of Lightning Components. Lightning components come with Lightning Design styling and are fully configurable to create custom Lightning components for the apps according to the requirements. Developers render these components to produce HTML Document Object Model elements within the browser.

Everything that happens inside a component is encapsulated and hence the developer can just concentrate on building their apps. Innovations, design changes, or any new change made to the components are done by the author of the component itself.

What are Lightning Web Components?

Lightning Web Components (LWC) is a stack of modern lightweight frameworks built on the latest web standards. It is a DOM (Document Object Model), element created through reusable code and is used to generate a dynamic interface without using JavaScript or building a Library. This feasibility makes it quick and seamless, saving the developers a ton of time and effort on the Web Stack. Let’s look at some of its remarkable features:

If LWCs get the same UI result, what is in store for Web Stack? 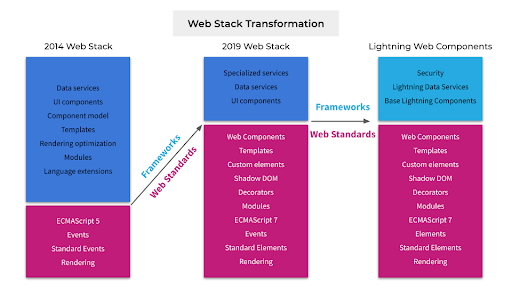 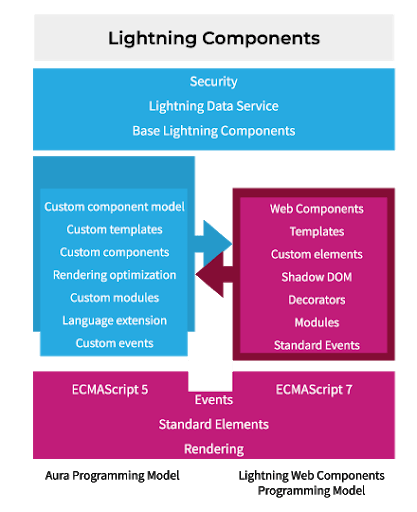